In differential calculus, related rates problems involve finding a rate at which a quantity changes by relating that quantity to other quantities whose rates of change are known. The rate of change is usually with respect to time. Because science and engineering often relate quantities to each other, the methods of related rates have broad applications in these fields. Differentiation with respect to time or one of the other variables requires application of the chain rule, since most problems involve several variables. ( Wikipedia)

Many students have difficulty with developing a mathematical model for a related rate problem. Some of the difficulty stems from a lack of geometric visualization skills so that the written description of how things change over time can be translated into an algebraic form. An animation of changes over time can help students focus on salient features of the geometric figure involved and hence provide an opportunity to algebraically relate the changing portions of the figure. With this in mind we have developed a some animations that illustrate a variety of standard related rate situations.

An outline of the general approach to setting up related rate models. The steps list below are really interrelated and are ordered merely as a guide so students have a starting point for aspects of the solution process. The steps involved are illustrated with several examples. We then provide a collection of statements of related rate problems together with visual demos that can be used within a lecture or assigned for students to use for practice. We expect the user is to supply the algebra and calculus to accompany the situation.

Outline of steps in a related rate problem.

We present several examples of situations that employ related rates to solve a problem. The way the situation is stated will help set up steps like those suggested above.

Example 1. A spherical balloon is being inflated with a gas at the constant rate of 4 in3/sec . Determine the rate of change of the radius of the sphere. The figure below shows frames from an animation where have we inserted the radii. (The animation can be viewed by clicking the link Inflating a Sphere .)

The next step is to differentiate this equation. We must use implicit differentiation with respect to t.

As the sphere enlarges the rate of change of the radius deceases rather quickly as shown in the table of ordered pairs and the corresponding graph below.

The accompanying graphs provide a good look at the behaviors for a set of larger radii of the sphere. 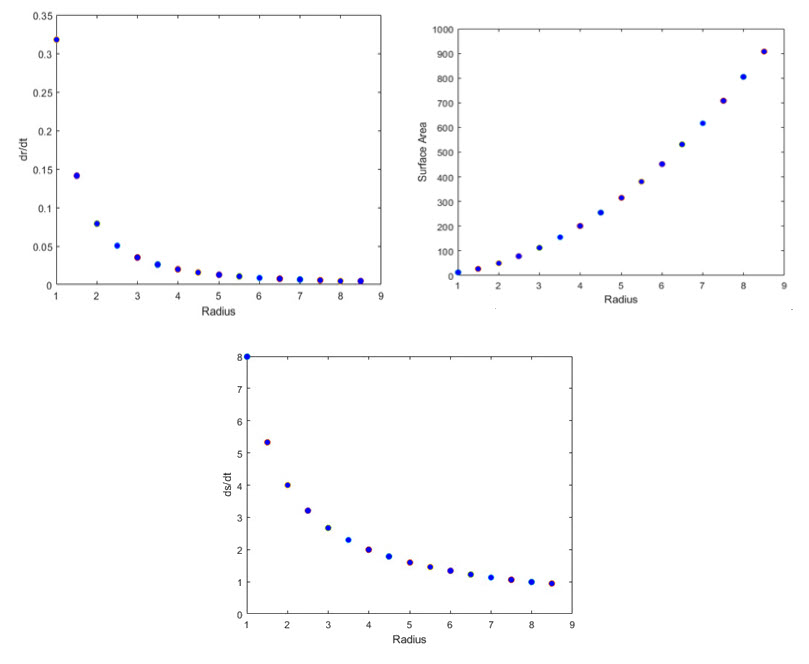 "Mathematics is the study of patterns, both quantitative and spatial. As such, it is the key to understanding our natural and technical world. Through the study of mathematics, students develop skills in problem solving, critical thinking and clear, concise writing." (Just search using a browser using 'mathematics the science or study of patterns' to find books related to the topic and the preceding quote.)

We have an opportunity to use the data table to seek patterns in each of the three columns that contain colored data sets. In each of these three columns the colored entries contain information for values when the radius, r(t), has been doubled. HINT: To help obtain the patterns the value \(\large \pi\) is involved. Since the data table contains only four decimal places, possibly rounded, use your imagination and calculator to help develop the patterns. After you feel you have the patterns formulate an entry for each column for r(t) = 16. 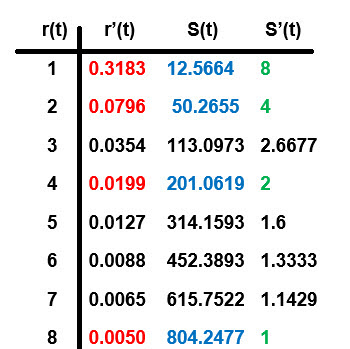 Triangles and Related Rates: The example on the spherical balloon relied on formulas that we could differentiate to obtain rates of change. There are a number of well-known related rate problems that involve creating triangles to aid in developing formulas that can be used to obtain related rates involving time. Many of these problems use geometry to help set up the involved triangles. Here is a short list:

The triangles involved in such problems may lead to using similar triangle properties or the Pythagorean Theorem. In either case the differentiation is implicit with respect to time.

In each case we can "geometrically" set up a diamond in which a triangle shows the action. (Look at the figure below.) The base paths are each 90 feet and there is right angle at each base.

The images below illustrate these two scenarios. 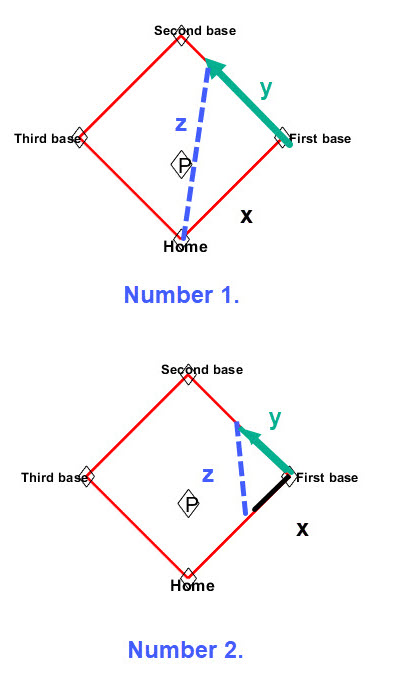 Each of the situations outlined above can use the Pythagorean Theorem to obtain the related rate. For a detailed look at a baseball diamond related rate problem click on the following link Baseball Demo. The demo provides a step-by-step solution to a related rate example.

To illustrate several types of related rates click on this link Related Rates Slide Show. It is a slide show that has four examples.

Our related rate problems on runners/hitters running the bases assumed that they would take a straight line between the various bases. This may be correct for stealing a base, but certainly not the case for a hitter who hits the ball to the outfield and expects to get more than a single. In such a case the hitter leaves home at an angle so he can make a quick turn at first by just stepping on a coroner of first base and head towards second base. Such a path is called a " banana path" and depends on the angle used to leave home. If the runner determines to head toward second base there is a similar "banana path". (Look at the figures below.) If the runner continues past second heading to third there is another similar path behavior. As one would expect, a runner that is trying for in the park home run travels again on a "banana path" from third base to home.

Naturally from a mathematical view point the following question arises: What is the optimal path for a base runner? This is interesting since a student at Williams College ask this question and it subsequently led to a published work involving the student and several faculty. There are two good places to read more on this topic; the first is a quick summary and the second is an in depth work that developed a model for the optimal path: Huffpost.com and Optimal Path .

"The model's only assumption is an upper bound on the runner's acceleration vector, which we take to be 10 feet per second per second for the times given here. For a better runner the acceleration might be greater and the times correspondingly faster, but the optimal path is the same. The markings around our optimal paths show the acceleration, forward at the beginning and end, leftward for most of the path." (From the Huffpost.com summary.)

A short variety of related rates.

The related rates technique is an application of the chain rule with first derivatives. Related rates problems can be identified by their request for finding how quickly some quantity is changing when you are given how quickly another variable is changing. It should be used carefully because it does not work with higher order derivatives, or with derivatives of functions of several variables. Here are a few examples.